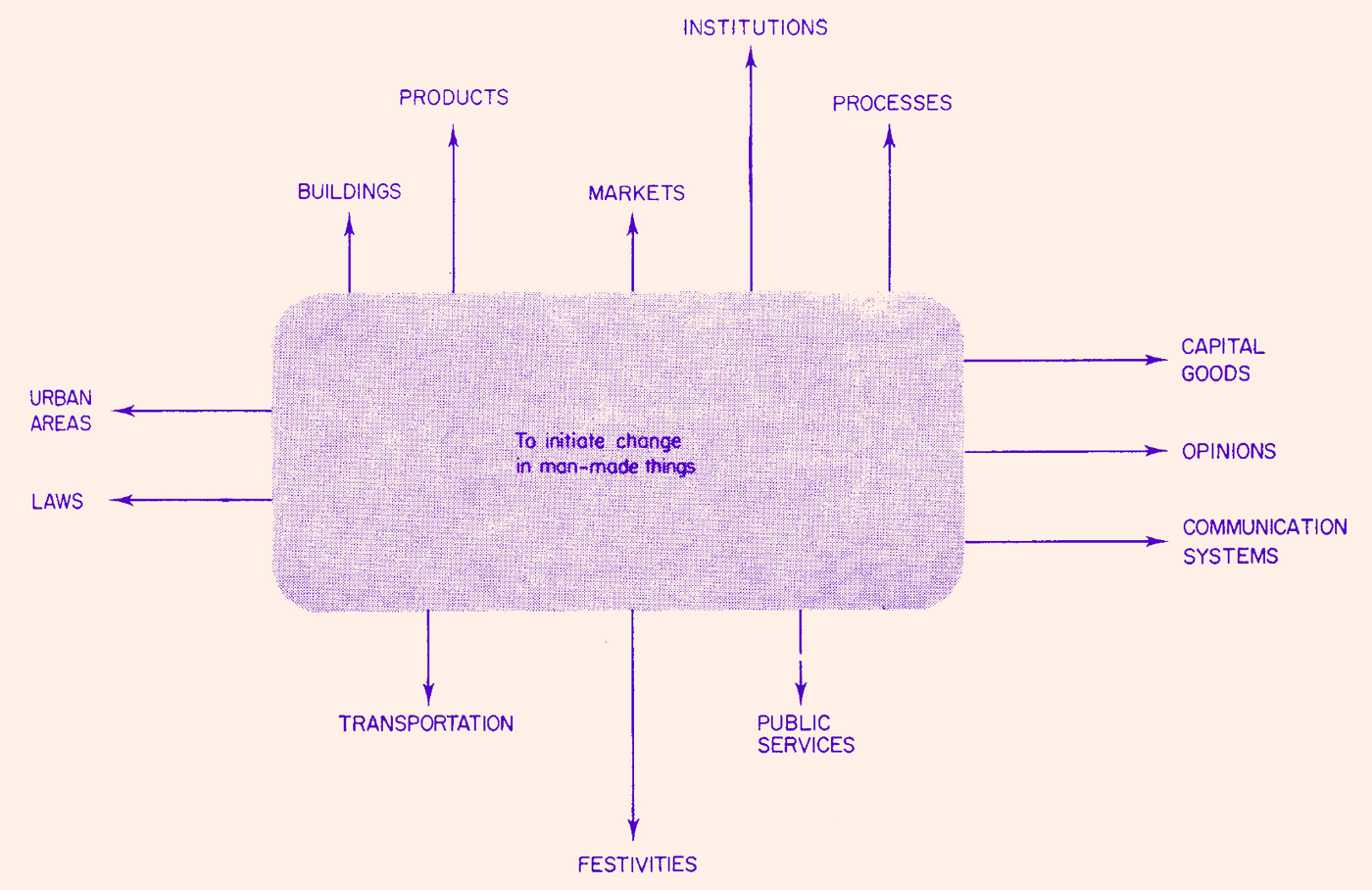 Design Has a Language Problem

How we talk about our field shapes what it becomes.

Design has a problem with language. The field’s fairly recent ascent into the public consciousness has meant that perceptions about and expectations of designers have been warped. I particularly discuss the language which many use to talk about design, the shortcomings of contemporary design education, and the importance of critically examining the impact of the perception of design on the practice of design.

Drawing from both historical and contemporary examples, I argue that the appropriation of design and design terminology by corporations has rendered the practice into an over-simplified version of itself that negates its intense richness and intellectual rigor. And in a period of rapid technological innovation, a nuanced understanding and ability to practice design is more valuable and necessary than ever. I also argue that this appropriated rhetoric has bled into design education, thus reinforcing an incomplete understanding of the value of design in students entering industry by the thousands.

Fire and brimstone aside, I believe there is hope for design yet–our society’s reckoning with the fallout from corporations like Facebook and Google has sparked debates on ethics, privacy, security, and many other important topics. I think that designers are well positioned to take on such interdisciplinary roles that grapple with issues larger than making micro-interactions and login flows; and as the language used to describe design evolves, designers will be expected to assume that responsibility.

Some [brief] context on design discourse

Design has a rich intellectual tradition. We might start with Christopher Alexander, who in Notes on the Synthesis of Form speaks of design as a collection of methods for finding ‘goodness of fit’ between a created form and its context. He later recognizes in a revised 1971 preface to the seminal book that his proposed methods had become the obsession of the field, and remarks that “study of method by itself is always barren”. Alexander saw that preoccupation with method as a fundamental misunderstanding of his core ideas about design.

John Chris Jones takes up the mantle of discussing design methods and argues that there is some need for the continual reflective design of design methods themselves, or “designing designing”. In other words, the existence of “massive, unsolved problems created by the use of man-made things” has necessitated a method for evolving methods. If design claims to solve problems, it must also reckon with the reality that problems are always evolving and cannot be boiled down to a singular set of steps.

The complex nature of most design challenges is crystallized by Rittel & Weber, who wrote of the pervasiveness of “wicked” and “ill-structured problems” back in 1973. Most real-world problems are tangled in a web of interacting forces, and solutions that are put forth in an attempt to untangle even a small part of that web can result a ripple effect which is impossible to predict or measure. The prevalence of wicked problems implicitly demands of designers an ability to critically consider the implications of their work, especially in high-stakes environments.

We can also jump forward to 2016, to Don Norman’s "Design X", where the x represents some unknown value that captures the ambiguity and complexity of designing within sociotechnical systems. His proposed approach for designers working in the realm of wicked problems is an incremental, interdisciplinary, and iterative suturing of design to evolving, complex situations–and like Jones in 1970, says that extant methods for design are insuffient for the task at hand.

Contemporary design has a language problem

In 2015, InVision released a documentary called Design Disruptors that captured the meteoric rise of design in the public eye. More than ever before, it argues, design is solving real problems and proposing better futures, and people are taking notice.

Today, design is often heralded as a solution to myriad societal and business problems. Design is considered an act of disruption and change-making that empowers people to live better lives.

One of the most palpable manifestations of this propaganda is the term ‘design thinking’. The term has permeated the mainstream consciousness, and through its popularity has been warped by over-simplification. Suddenly it is not only taught as gospel in design programs, but is taken up by hordes of ‘innovators’ as a framework for future-building. There’s a disctinction to be made here: professional designers are not necessarily the people who are being consumed by the propaganda that ‘design thinking’ markets itself with. The real problem with ‘design thinking’ is that it often betrays the complexity and interdisciplinarity of good design in favor of concocting a ‘theater of innovation’.

Image from the HfG-Archiv/Ulmer Museum. Sourced from Artsy.

As design and its terminology are appropriated by businesses looking for the next cutting edge thing, expectations in industry have become warped in the process. Some stunning examples can be found with a quick search for UX and product design role descriptions from companies with no idea of what value designers actually bring. Recruiters writing description copy often seek ‘design rockstars’ who want to ‘create innovative and world-changing experiences’, ‘craft stunning visuals’ and can also ‘code in React’.

Many companies looking to get in on the design action (i.e. businesses other than the Googles and Facebooks) seem to think that hiring a designer is the catch-all solution they’ve been waiting for. And design educators are sensitive to the expectations of industry–it is after all the goal of most higher education to churn out industry-ready grads. The language problem with design unsurprisingly drips into education.

A quick browse of General Assembly’s (GA) User Experience Design courses portray a field decayed by marketing language and buzzwords. One offering is a two-hour "Intro to UX" webinar, of which one of the promised takeaways is the ability “to create a clickable prototype using InVision”. Think about it: someone’s very first introduction to the field, and they’ve already been thrown into making screen prototypes–with little to no understanding of why it is being done. Alexander’s call to reject blind acceptance of method falls on deaf ears.

As one GA graduate remarks in a marketing anecdote, she was able to “introduce design thinking to [her] organization” after a single GA course. The delusion is compounded by the plethora of two-day bootcamps and hackathons that promise to give attendees the tools they need to start designing. I would not trust a carpenter who learned the trade in a two-day carpenting bootcamp.

The propaganda rife in design education undercuts the intense richness of the field. In the context of Rittel and Weber’s writing on wicked problems, the focus on methods seems like a severe misjudgment of design’s abilities. Focus on method alone reverts design to craft.

The front page of Dribbble.

The vocabulary of design’s language problem is also visual. A cursory glance at Dribbble reveals a design zeitgeist saturated with hollow marketing copy and glossy illustrations that depict utopian visions of what a product can offer. There’s a reason people talk about the “Dribbbilisation of design”–it’s a symptom of the oversimplification of design. Paul Adams from Intercom sums it up well:

“If product design is about solving problems for people within the constraints of a specific business, then it simply feels that many people calling themselves product/UX designers are actually practicing digital art. They are Artists. They are Stylists. Executing beautiful looking things, certainly an important skill, but not practising product design.”

The increasing complexity of artificial things requires a more nuanced understanding and ability to design than ever before. John Christopher Jones says that “the most obvious sign that we need better methods of designing and planning is the existence, in industrial countries, of massive unsolved problems created by the use of man-made things, for example traffic congestion, road accidents, urban decay, etc.”. In the following decades our technological systems have only exploded in complexity and interactions with one another.

At the same time, new designers with overconfidence and rudimentary tools are jumping into a swamp of wicked problems, where their work has real impacts on the people who use it. A designer working on a healthcare product could quite literally kill someone with poor design.

Sourced from It's Nice That.

The tension between design and capitalism

I believe that at the root of design’s language problem is the appropriation of the field by corporations and its bleeding into contemporary design education. Related to this is a larger tension that exists between capital-D Design and the economic machinery it is mostly situated within. Take for example the complicated relationship between industry and Germany’s Ulm School, which valued a “commitment to social needs” that seemed at odds with industry’s motivation to maximize profits.

It seems that much of today’s design education and even the field itself has drifted closer to the profit-maximizing motivations of industry. This is not necessarily a bad thing: design inherently occurs within a capitalist framework, and so shaping the field to better fit in with existing structures seems like a necessary step to elevating the role of design in business. Jon Kolko praises the greater influence that design has in industry, as “an organizational focus on design offers unique opportunities for humanizing technology and for developing emotionally resonant products and services”. Yet profit-seeking is at the same time counter to the many potential design responses that could affect positive change in people’s lives. And in many cases it is having real, negative impacts on people–from data harvesting to gentrification.

Furthermore, a focus on profits means that the ‘design process’ is often cut short. Nobody has the time they need for the ideal process; I was surprised to hear from my capstone mentor at IDEO that his team usually makes something ‘based on a handful of interviews and a hunch’–quite a different process than what I learned in school.

This is not to say that design is at fault. I think that the opposite is more true: designers are often better equipped to ‘fight the good fight’ in creating services that are more amenable to people’s needs and abilities. And central to the design practice is an ability to make the designed things actually feasible, so that they might be incorporated into daily life and serve whatever function they were meant for. Business interests are another material of the design situation. When one of my graduate school professors gives a demonstration of a whiteboarding design challenge (commonly used in tech as a barometer of interviewees’ design skills), his first impulse is to ask “what are the revenue drivers of this product”?

As we collectively become aware of the unethical practices of large technology companies, conversations on ethics and responsibility have taken center stage in design. At the most recent IxDA annual conference, it seemed like every other talk professed a need to better consider the unintended consequences of design. I think there will be a shift away from the ‘move fast and break things’ mantra of design and tech, towards a more considered approach that deals with the complexities of ethical and social issues.

Only conversations can change a field, because it is through conversation that we develop the vocabulary of a practice. We probably need to ditch the term ‘design thinking’ altogether if we are to move the field forward.

Reflecting on the state of design

When an entire field is ushered into the mainstream, there is some relinquishing of control, primarily in the language that is used to talk about the field. The role and expectations of designers becomes malleable to the language which describes it; if companies decide that UX designers are just fancy new visual designers, that’s what students of design will end up working towards.

There is a flow of influence that follows language as it drips from popular consciousness, to businesses, to educators, to students. But if language is the problem, we are already moving in the right direction by openly discussing the role and responsibility of designers today.

BACK TO ✏️ WRITING